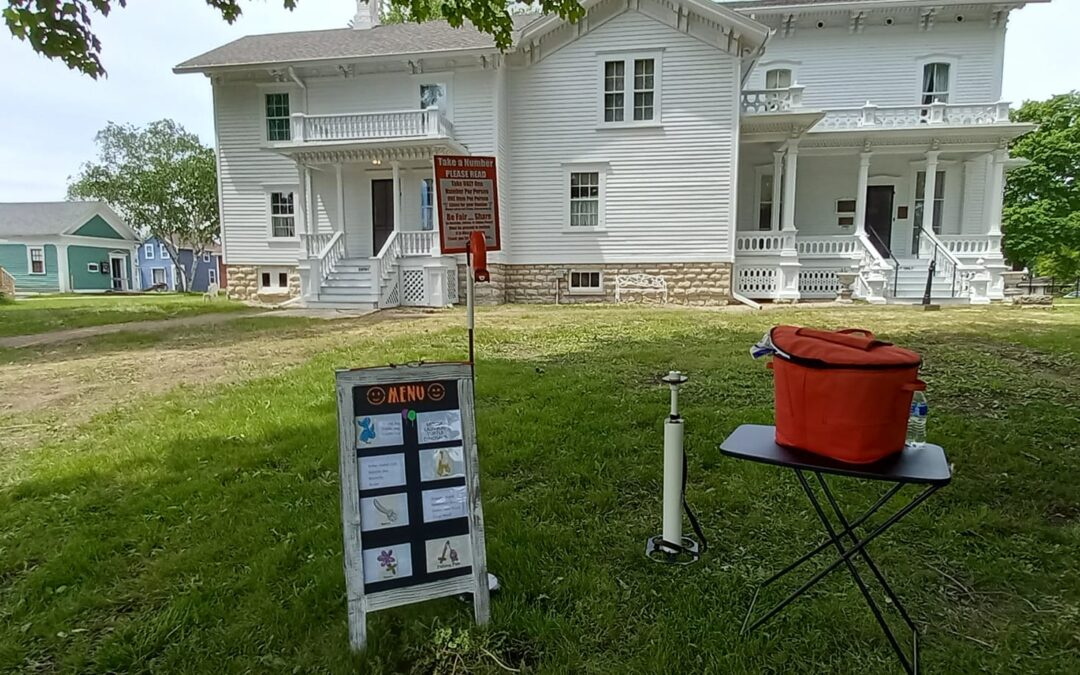 There I was, standing outside the Galloways House on the Fond du Lac County Historical Society grounds waiting for people to arrive to the event. I was nervous inside. My hands shook a little bit from excitement but not much. It had been a long, long, long time since I performed and twisted balloons for a live audience. Last time I performed for a live audience was August of 2020. That was in Sherwood, Wisconsin for the parks and rec of Sherwood. It was a nice event but we really social distanced the show and my audience was one beautiful family, maybe it was two families. So while it was fun and enjoyable there was zero contact and the energy just wasn’t there that I work off of. However, in front of the Galloways House…that was full of pep, energy and terracotta. What…terracotta? Yes, terracotta, read on for more of the story.

Sunday May 30, 2021 was a great day for “getting back to normal” I arrived over an hour early to the Re-grand Opening of the Fond du Lac County Historical Society event. I set up the sound system for the magic show and the balloon twisting gear (pictured) to the side of the beautiful Galloways House. Then I waited. The first hour was just about nobody until the last 5 minutes but I was prepared with my menu board to make a wonderful creation for anyone that wanted one. I even created a cute and cuddly polka dotted fish to attach to the menu board to attract people.

Second hour arrived and people sprinkled in. I started out making beautiful layered flowers, I even attached new butterflies to the flowers that added a little extra something special to the flowers as time permitted. As 2 PM approached I stopped making balloons and finished the final preparations for the comedy show I would be performing.

The comedy show was filled with magic, laughter, oos and aahs. My sidekick Sherman the Magic Bunny was up to his old tricks again and even the weather was perfect for outdoor performing. But, the audience is what made the difference from a good show to becoming a great show. There must of been over a hundred people there with 50 kids sitting down in front (this is a guess). It was electric.

There were a couple hiccups like the wind kept moving my balloon bin. There were laughs because of that. My favorite laugh moment was the one boy, he must of been in 5th grade, really wanted to use terracotta as a magic word. If you haven’t seen what of my kid shows I will tell you that they are interactive with the children participating up front or from their seats. Wiggling their fingers, saying the silly magic words to help Zoomalatata, that’s me, work the ‘magic’.

After the show, I went back to twisting balloons for 2 hours. This time my balloon area was about to be busy. It made use of my new take-a-ticket system I added to help with social distancing and really to cut down on boredom. Anyone who wanted a balloon would take a ticket and then they just needed to be back in time to come up and get a balloon creation when their number was called. It made things, a lot easier and people had a better idea how long it was going to take until they received a balloon.

It sure is good to be back working. A true blessing.

Have an Amazing Day and I will talk to you next time,

P.S. If you are interested in having Zoomalata at your event please fill out the Contact Form.